Bringing on the Thaw 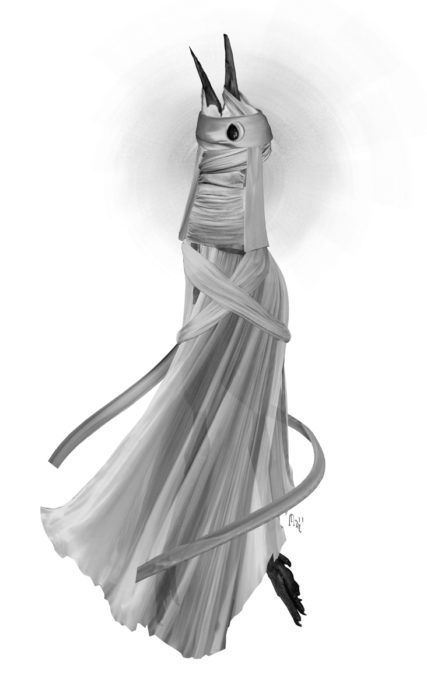 ollowing my sister, I joined the other revelers by the bridge. I believe all of our neighbors were there. Blue dusk tinged the snow, matching it to our pale dresses and furs. Approaching, one saw how the weir’s crude timbers had not disappeared, but were rather concealed by a shell of ice whose opaque veneer mimicked the stones. Sculpted like an extension of the parapet, it occupied the bridge’s archway, forming a giant cartouche wedged between the banks.

There were veiled beekeepers — genuine or pantomime I could not tell — stationed around the sculpture, bearing long torches with small flames. Down below, masked figures loitered with clubs on either edge of the river. At the sound of a sharp whistle, they commenced at battering the frozen stream (which was already broken up here and there, and no longer safe to skate upon), while the beekeepers lit a series of wicks that hung from small flutes of blue glass planted in the molding.

A sound once faint now filled the air — a harsh drone, polyphonous, like the roar from a violated hive. It came from behind the ice cartouche, and as the river surface cracked below, an eruption tore across the elegant shell: Numerous pinpoints became sharp beaks, and then strange little heads. Soon whole bodies were plunging into the exposed water, churning it with nervous vigor.

Coarse linen contrivances harnessed their necks, hampering any natural movement of the head. A beak thus appeared to project from the top of the skull, and by parting, resembled a slender miter. To me this evoked the woodcuts of “sea-bishops” glimpsed in old books I was not allowed to touch. Aiding the conceit was a loose muslin gown that trailed past the feet — suggesting a broad fishtail, but just as well some phantom’s vague extremities, or perhaps the undone swaddling of an infant tossed from its cradle. As if to confirm this last impression as the intended one, the upper body was adorned with satin ribbons of the broad white kind reserved in our country for newborns.

These cranes were not hatchlings, but immature members of that subspecies that often errs by brooding out of season. Born too late to join the flock and escape the winter, they had grown strong enough, in the main, to suffer this task without drowning. The struggles of any single bird would have meant little — but a writhing mass of them, expelled in this way, sustained the notion that these were human shades, robbed of life at birth by this winter’s cold, trapped in limbo and now released by some heavenly fiat. The swarm below me looked ready to join a phalanx of angels circuiting Dante’s empyreal blossom. For the moment I accepted this, despite the beaks, the flashes of webbed feet, the downy white bellies and tails.

“The thaw – the thaw is finally upon us!” I recognized our gamekeeper’s voice, though it came from a long-beaked mask identical to those on the ice-breakers beneath us. His loud remark seemed an observance, unlike the artless cheers of the crowd.

I was nearing sixteen, and my heart no longer received the world with a child’s indulgence. As taken as I was with the spectacle, I understood the truth of its players and their unwitting goal. I knew that many of the cranes, failing to shed their outfits, would eventually perish; that the thaw did not derive from their fate; that none among us, save perhaps a very few innocent souls, believed it did; that for most, this was not even the high point of a festal evening; that one group of young men (all landed, lettered, and insolent) surreptitiously breached the fast as they viewed the ceremony through white half-masks that freed up the nose and mouth, providing access to bunched cloths that they held like handkerchiefs but were actually scraps of Swiss flannel soaked in colorless spirits, such as a costly brandy fashionable in the towns (my sister’s guess), or perhaps certain opiate tinctures, or chloropallidol, or even ether; that this had not been a fixture in the winter celebrations for decades, and was revived this year on a whim (because of the lingering frost) as one might dust off a chest of costumes for an outmoded play; that surely I would not see it again.

These few minutes at the bridge were time enough for night to extinguish the blue half-light. For our benefit, a few beekeepers dangled paper lanterns close to the stream. Hive-shaped, they trembled on their hooks the way real hives, nestled close by, might have stirred with the waking of their winter clusters. More torches came alight as the talk fixed upon the next festivity, not to be missed: fireworks, near the ruins, a mile north. With the crowd dissolving and the last bird now well past us, still I kept my eyes on the grinding white surge, watched it wind past gelid clumps and under the larger sheets, then fade, swallowed by unlit stretches long before that dark liquid drained into the Black Sea.