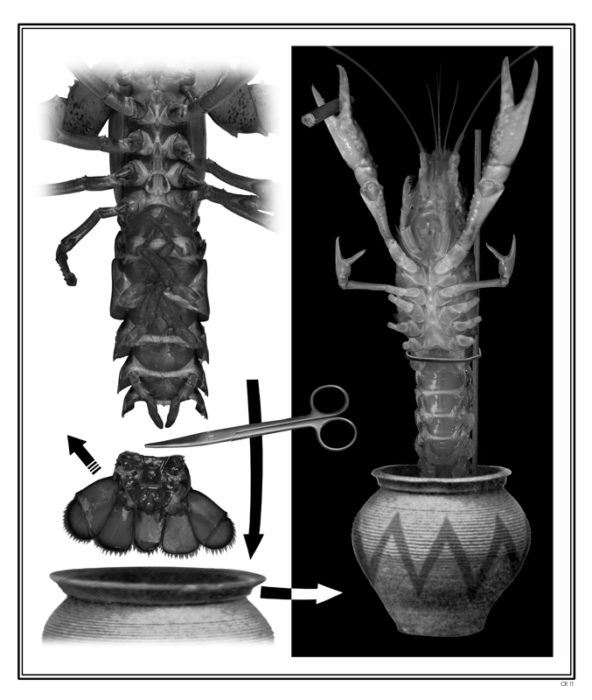 he Madagascan spindly crawfish (A. madagascarensis secundus) must be kept aligned by the tongs (thwarting the hind-parts’ natural tendency to curl), and held vertically over the pot’s mouth. Amateurs commonly sever only the tail-fan: a mistake that leads to agony and inevitable death. Instead one must shear — cleanly and with the utmost haste — the entire sixth pleon, including the telson, and plunge the reduced creature directly into the ready soil. After binding it to the post, the gardener must resist any urge to molest it further, other than replenish the soil with the special solution every four hours for the next fortnight. The aforementioned dampness and temperature must also, of course, remain consistent.

Properly tended, the potted Madagascan exhibits notable changes in the first month of its second life: it shoots up like a bamboo cane, increasing little in girth but near-quadrupling in height. Its carapace loses color and attains the ashen complexion of unpolished pearl. Its eyes fade to an amber cast, grow large on their stalks like ripening fruit, become egg-shaped and develop heavy lids. The six hindmost walking-legs atrophy into stubs, while the fourth pair locks into a single attitude: each limb outstretched, the initial joint perpendicular to the torso, with the propodus bent upward at another right angle and the dactylus bent yet again: a gesture of rejoicing often assumed by ancient statuary.

As for the chelipeds, or forelimbs, their pincers, though grown larger, appear proportionally diminished — but it is their movement that has altered the most. They prod and grasp with the facility of a creature that lives wholly out of water, as our specimen has become. Replacing the brute flailing of the aqueous incarnation are precise signals to its minders (pincer to mouth) that it desires to eat. When we attempt to provide it with the usual vegetal scraps, it surprises us again by receiving them manually, making clear that it wants not to be fed from one’s hand, but handed its feed. We hear from a prosperous tobacco merchant in Nueva Gerona who claims to have taught his crawfish-plant the joys of a good cigar — which, as a matter of course, he now shares with it after supper.